As part of our campaign, here is a brief summary of developments in the field of insurance divestment.

Axa announces it will phase out coal from its business activities by 2030. This pledge applies to OECD states with the rest of the world to follow in 2050. The move is hailed as setting ‘a new global benchmark for best practice”. The company also promised to cease underwriting new coal projects larger than 300MW. The moves form part of a plan to align AXA’s business with a 1.5C global warming limit as set out in the Paris Agreement. What is significant is that AXA admitted its current investments have a ‘warming potential’ of 3.1C which is well above safe limits.  We believe this should become the minumun standard for the insurance industry and call on others to follow.

Naturesave launch new company website to expand reach and highlight to the positive outcomes of operating as an ethical insurance provider. The site features the work of the Naturesave Trust which has raised over £850,000 for environmental causes since it was set up in 1995.

Naturesave become founder members of the Climate Perks campaign which encourages empployers to offer their staff additional paid holiday for travelling over land instead of flying. The campaign promoted by campaign charity Possible is picked up by the BBC.

Insurers warm that climate change could make insurance unaffordable. Following record losses as a result of the Californian wildfires, the worlds largest reinsurance company has warned that the increased risks from wildfires, flooding and storms is so significatn it has the potential to push up the price of insurance so it becomes unafordable to people on low and average incomes. What is also significnat about this headline is that insurers are starting to recognise that weather events are linked to climate change.

To kick off our Campaign for Insurance Industry Divestment, Naturesave have contacted the CEO’s of over 30 of the largest insurers in the UK, asking for further information about their climate change resilience strategy and requesting to know what their divestment strategy is.

We will publish any responses to these letters online, to provide transparency on the different approaches by the leading insurance companies in the UK.

Here is the wording of our letter:

You may be aware that last November the Governor of the Bank of England, Mr Mark Carney, addressed the issue of Climate Change in a Lloyd’s of London in a speech titled “Breaking the Tragedy of the Horizon – climate change and financial stability”. There is now clear empirical evidence that highlights the growing impact of climate risks.

As a market leader in green and ethical insurance for over 25 years, our ethos is to act as an agent of change within the insurance sector, striving to create a more sustainable future. We have a GWP of c£2m, with year on year growth, excellent quote take up and renewal retention rates along with good loss ratios across a wide range of risk types.

Our clients, our staff, their families, children, and grandchildren, those around the world in the most deprived areas, the ones that will be hardest hit by climate change, those unborn who will come to live in the world we leave behind, all require the business leaders of today to act.

Over and above the humanitarian interest, the insurance industry has a self interest in mitigating the impact of climate change, it is at the front line of climate risk and it cannot indefinitely increase rates and restrict cover to counterbalance the losses, if severe weather patterns continue, the worst case outcome is that entire perils or regions becoming uninsurable.

The success of COP21 underlined the political desire to address the issue of climate change, the insurance industry however, continues to insure and invest in fossil fuels and other environmentally catastrophic commercial activities. In a recent survey, 9 out of 10 of respondents aged between 16 and 34 thought it was important for businesses to take care of wildlife and the environment. The future must be sustainable.

The Ceres/Mercer report, ‘Assets or Liabilities? Fossil Fuel Investments of Leading U.S. Insurers’ from May 2016, notes that the top U.S. insurers have half a trillion dollars invested in fossil fuel energy and that climate change risk management needs to be a “board level governance issue” and insurers should be trying to reduce climate related investment risks.

S&P Global Ratings considers that the impact of climate change on insurers “is likely to be multilayered and significant over the long term”. This takes in to account not just the direct impact, but also indirect factors such as legal issues, regulatory issues, reputational issues, stranded assets and macroeconomic/political concerns.

There is a clear advantage to first movers and being a part of the low carbon transition will offer access a growth market with a further $13.5 trillion in investment expected in energy efficiency and low carbon technologies between 2016 to 2030.

We are pleased to have seen developments in the last six months, with the formation of the Insurance Development Forum by the United Nations for instance, and the Geneva Association affirming the reinsurance industries commitment to “supporting global climate resilience”. Nonetheless, whilst we acknowledge that there are significant barriers, we strongly believe that all insurers should be divesting fossil fuel investments as soon as possible. Such divestment makes the fossil fuel industry accountable for its role in creating this crisis.

Thank you for taking the time to read this letter, we look forward to hearing back from you on your climate change resilience strategy and with any feedback we can pass on to our mutual clients about your investment and underwriting policies moving in to a low carbon era.

Why are we doing this? 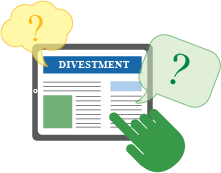 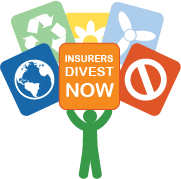