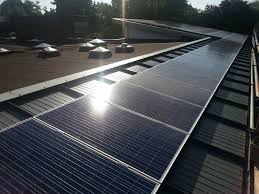 Ashton Hayes Community Energy (AHCE) is a Community Interest Company owned and run by the people of Ashton Hayes in Cheshire. Established in 2011 as part of the award-winning Ashton Hayes Going Carbon Neutral (GCN) project, AHCE develops and manages community-owned renewable energy in the village and promotes energy efficiency. Over the past decade, the GCN project initiative encouraged residents to cut community emissions by almost 40%. In an effort to reduce emissions even further, AHCE installed an additional 14kWp of solar PV panels on the village primary school roof in June 2016, bringing total community-owned PV capacity at the school to 29kWp. Projections indicate that the combined array will supply a large proportion of the school’s electricity needs and will make it a net exporter of electricity during the summer months. Income from the new PV will be invested by AHCE in further energy projects in the village.

The new PV array could not be installed until the school’s electricity supply cable had been upgraded. The Naturesave Trust provided a grant towards the cost of the new supply cable.