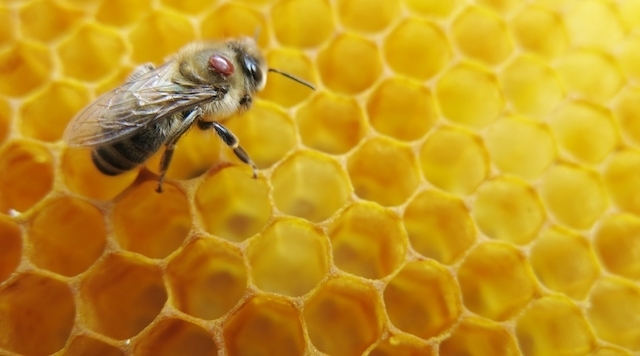 The Solar Bee Project is an initiative funded by the Naturesave Trust that aims to protect honey bees from the deadly varroa mite using thermosolar beehive technology. The project is being rolled out over five sites across the country and aims to prove the effectiveness of using the power of the sun to protect honey bees from a parasite that has been damaging bee populations across the globe.   The Thermosolar hives have been located on community solar farms as part of a further initiative to highlight the biodiversity potential of these sites and the benefit of producing honey alongside renewable energy.

Back in 2017, the Naturesave Trust got involved in a project to bring bees onto a 4.5MW solar farm in Charlbury, Oxfordshire. The site was owned by a community group called Southill Community Energy. One of their members, a beekeeper named Tom Worsley, had heard about a new type of beehive that used heat generated by the sun to eradicate a parasite known as the varroa mite.  Under Tom’s guidance, the community group approached the Trust to apply for funding to purchase a pair of thermosolar hives.

Funding was approved and the site at Charlbury became home to the first thermosolar beehives in the UK. It soon became apparent that the hives offered an effective and much needed chemical free solution to protecting bees from the varroa mite.  What’s more, it also became apparent that locating thermosolar beehives on a community owned solar farm, created a unique set of benefits.  Introducing honey bees generally leads to improved outcomes for the local environment. The obvious and immediate benefit comes from the bees, who offer pollination services to local trees, plants and nearby agricultural crops.  In addition to this, the very presence of the bees encourages site owners to improve onsite biodiversity and make the environment more bee-friendly by adding habitats such as wildflowers, hedgerows and meadows. This, in turn, attracts further wildlife such as insects, birds and small mammals. The end result is a solar farm that generates renewable energy and also provides a much-needed boost to local biodiversity.  A further benefit is derived from the honey produced by the bees, which contributes to the local economy and also helps promote the benefits of the community group.  The honey can be branded in the name of the community group and sold locally. In addition to the honey, the beeswax produced can also be sold to benefit the local community.  These products also help build awareness of the benefits of locally produced solar energy and strengthens the educational benefits that community solar farms can offer.

These benefits create a synergy with the primary purpose of a solar farm. Solar farms perform a vital role in protecting the environment, by decarbonising electricity and rewarding local communities with a share of the profits. Similarly, thermosolar beehives also use the power of the sun and can also claim to protect the environment.

Bringing the two together can only work to benefit both bee conservation and community energy.

As a result of the success at Southill solar, the Naturesave Trust decided to set up a project that introduced thermosolar beehives to community owned solar farms, and so the Solar Bee Project was born.

As an initial trial, the Trust decided to invest in ten thermosolar beehives and entered into a partnership with Thermosolar beehives UK, a start-up created by Southill Community Energy beekeeper Tom Worsley. The thermosolar beehives are relatively new technology and whilst they have been used individually in various countries, this investment by the Naturesave Trust will constitute the largest rollout of thermosolar beehives anywhere in the world.  The data captured across all the sites will be invaluable in determining the effectiveness of a new chemical free technology that could have significance for bee conservation worldwide.

As the Solar Bee Project gets underway, Tom and the team at Naturesave are now working with each of the selected community groups to ensure a suitable beekeeper is located and secure hive locations are agreed. The choice of beekeeper is critical to the project as they will be playing a key role in monitoring the effectiveness of the innovative thermosolar hives. Brexit permitting the hives are due for installation in early April.

Why bees need help with varroa

The importance of bees to our environment can not be underestimated. A recent worldwide study has highlighted that honey bees (Apis mellifera)are the world’s most prodigious pollinator.  In their quest for food, pollinators transfer pollen and seeds from flower to flower, fertilising the plant and keeping our ecosystems functioning in the process.  Tens of thousands of species of pollinators have been identified, including wasps, birds, bats, beetles and butterflies. However, when it comes to pollinating performance, few can come close to the honey bee, which we now known to be the single most successful pollinator.

Not only are they widespread and abundant in the natural world, but honey bees have also become integral to our food production. It is estimated that one third of the food we eat is dependent on pollination from bees. Unfortunately for some years now, bee populations have been declining across the world. According to the European Commission, Europe now has 13 million fewer honey bee colonies than is required for crop pollination.

The reasons for declining honey been populations include; global warming, habitat loss, pesticide use and the growth of harmful parasites such as the varroa mite. The incidence of varroa infections is spreading across the world at an alarming rate. Varroa spread diseases such as Deformed Wing Virus which can destroy entire colonies.

Until now the only recognised method of treating the varroa has been through the use of chemicals such as miticides. These treatments are costly and have mixed success. Some miticides have been withdrawn as the varroa have become resistant.  Furthermore, there is also the issue of traces of these chemicals being found in the majority of the commercial honey that we consume.

The Thermosolar hive design uses passive solar gain to elevate the internal hive temperatures, as a means of killing off the endemic varroa mite that currently plagues all bee populations. Varroa die at temperatures over 42°C, while Honeybees can tolerate temperatures as high as 50°C. The design of the hive is a clever balance between thermal insulation, internal heat sinks, and passive thermal solar panels. This ensures that the heat is spread evenly throughout the hive, ensuring there are no hot-spots, or areas that remain cold.

Beekeepers conventionally need to treat their bee colonies with a variety of chemicals to control the varroa mites, none of these chemical treatments provides 100% efficacy, and all of which have detrimental side effects, ranging from reduced fertility in the bee populations, aborted brood, and tainted honey. Furthermore, several of these chemical treatments have recently had to be withdrawn from the market as varroa mites have developed resistance to them.

For the first time, the Thermosolar hive design offers Beekeepers the opportunity to treat Honey bee colonies for varroa infestation, with 100% efficacy, without resorting to chemical means. This is a potential game-changer and puts the Solar Bee Project at the forefront of bee conservation.