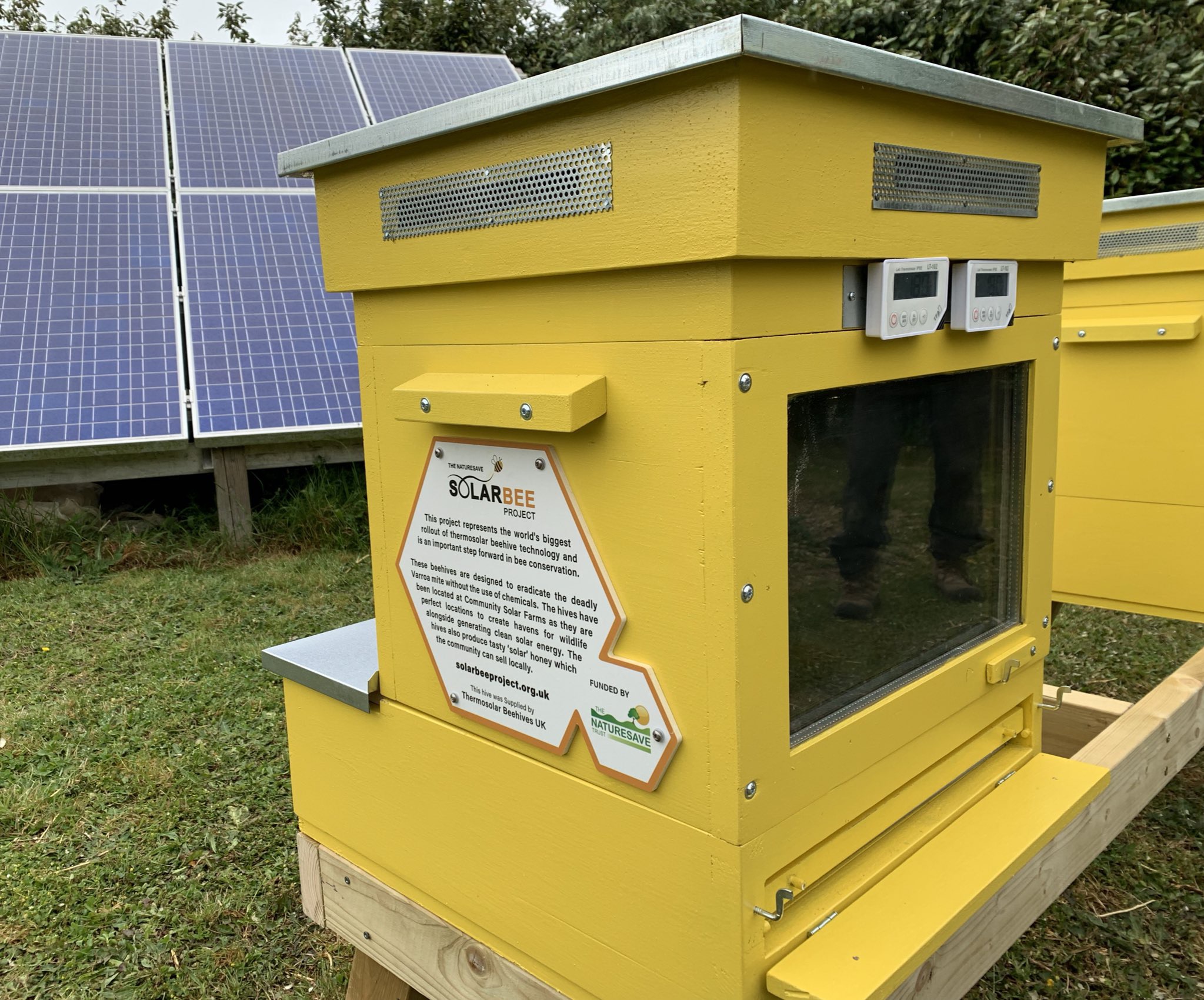 Here at Naturesave, we don’t just insure homes, charities and some of the greenest businesses in the UK, we also insure many community renewable energy groups. As a business devoted to using insurance to promote sustainable development, we are big supporters of communities generating their own power. These projects have the obvious benefit of helping to tackle the urgent issue of climate change, but they also help communities by investing profits back into the local area.  Naturesave has been providing hands-on specialist insurance for this sector for many years now. Our charitable arm, the Naturesave Trust, has also provided support to community energy groups across the country by supplying funding for start-up costs and capital investment.  The total amount awarded by the Trust, to this sector, now stands at over £200,000.

The inspiration for the Solar Bee Project came from a Naturesave Trust project that supplied a ground-breaking new design of beehive to a community energy group in Oxfordshire.  The unique design of the hives offered the potential to help protect bee populations without the need for chemicals.  As a result, Southill Solar, a 4.5MW solar farm managed by Southill Community Energy became the first site in the UK to install the new beehives. It was through this project that it became apparent to us at Naturesave that solar farms had significant potential to act as a resource to support bee conservation and provide a much-needed boost to biodiversity.

In addition to the established benefits of reducing carbon emissions and sharing profits with the community, a solar farm is potentially the perfect environment to create a haven of biodiversity.  With the addition of beehives, these community renewable energy sites can become net producers of pollinators.  If managed correctly, this can have significant benefits to the surrounding ecology as well as surrounding farmland.  The presence of managed beehives and the subsequent production of honey provides educational opportunities to the local community, as well as a small income from selling the honey.  Furthermore, the honey produced can be branded by the community energy group. This helps reinforce the tangible benefits of a community solar farm and strengthens the connection with the local people.

One of Southill’s local investors, Tom Worsley, was also a beekeeper. It was thanks to Tom that Southill Community Energy was introduced to thermosolar hives.  A passionate advocate of bee conservation, Tom became aware of a new design of beehive that eliminated the need for chemical intervention to maintain a healthy bee population. Tom points out that “Our bee populations are under attack and need our help more than ever. Bee populations are declining due to the impact of parasites, disease, and agricultural pesticides. The Varroa mite is an endemic parasite present in all bee colonies and can be particularly damaging to bees.”

Until now, beekeepers have had to use a variety of pesticides and other chemicals to combat the Varroa. Unfortunately, this intervention often ends up killing the bees and can, if not applied correctly, contaminate the honey. The mites have also developed resistance to many of the chemicals used.  Conceived and made in the Czech Republic, the thermosolar hives use the power of the sun to raise the temperature of the hive’s brood nest to kill off the parasitic Varroa mites

Tom observes, “What’s great about these hives is that they have been designed to protect the bees without the need for chemicals, or an external power source.  Using the power of the sun, the hive temperature can be periodically raised to 47 degrees C. This temperature is lethal to the mites however the bees are completely unharmed.”

Following the Southill solar project Tom has now set up UK Thermosolar, a business to import the hives to the UK.  Through UK Thermosolar, Tom is now working in partnership with Naturesave on the Solar Bee Project.  “With the help of Naturesave, I am looking forward to introducing thermosolar beehives to community energy groups across the UK. ”

The Solar Bee Project Is Born

In December 2018 Naturesave invited community solar farms from across the UK to apply to receive a pair of thermosolar beehives. The project, funded by the Naturesave Trust, was to run a trial by installing 10 of the innovative hives at five community-owned solar farms. A team from the Naturesave Trust, together with Tom Worsley of UK Thermosolar, reviewed all applications and select suitable recipients. The successful applicants were selected under a number of criteria including their suitability for supporting a bee population. The chosen sites were announced on the 25th January 2019

Any cookies that may not be particularly necessary for the website to function and is used specifically to collect user personal data via analytics, ads, other embedded contents are termed as non-necessary cookies. It is mandatory to procure user consent prior to running these cookies on your website.