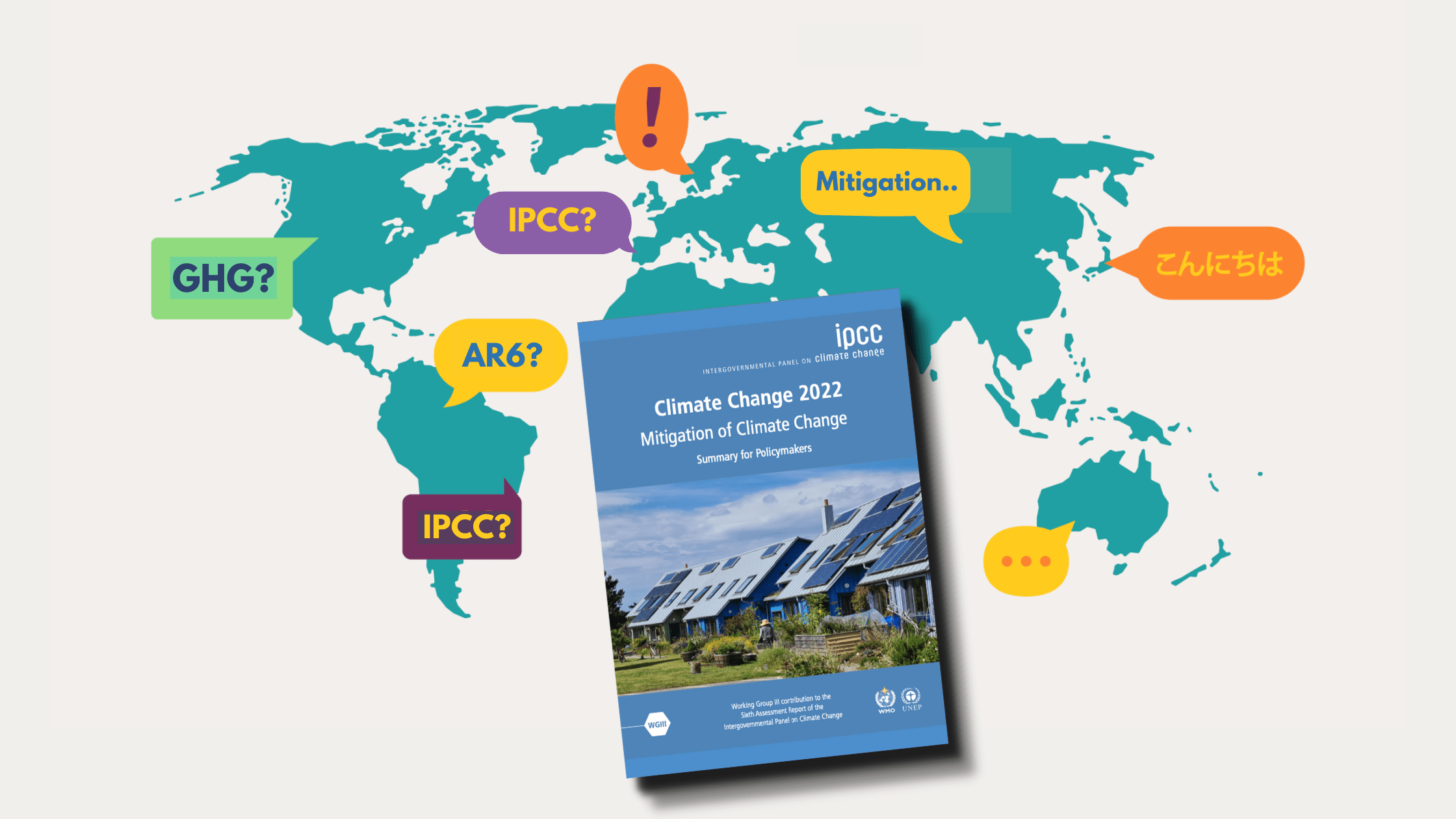 The IPCC Working Group III, sixth assessment report – Climate Change 2022: Mitigation of Climate Change has now been published. In this blog we explain what it is, why it matters and what the key environmental players have to say about it.

What Is the IPCC Report and why are there so many of them?

The Inter-governmental Panel on Climate Change (IPCC) is the United Nations body set up to assess the threat of climate change. It is written by a collaboration by scientists across the planet and agreed by governments in 195 countries.  There have been five assessment reports so far. This, the sixth, comes in three parts – the first two have already been published and covered the causes of climate change (yes, we can confirm its definitely us), followed by the impacts of climate change (yes, we can confirm that is not world any of us want to try to live in).

This final report is all about how we avoid irrevocable climate breakdown. Since each of these reports take about seven years to write, this one really is our very last official warning.

So what’s the verdict?

In very simple terms we can avoid the very worst of it, but we will have to take immediate and deep cuts to emissions, in every part of our economy and society.  This means emissions must peak by 2025 (that’s in 30 months!) and be almost halved by the end of the decade.  To do that we need to electrify everything, substantially cut fossil fuel use, become more energy efficient and make some lifestyle changes (particularly the high emitters).

Is this even possible?

The good news is that technology is not stopping us, we have all the tools we need. Likewise, neither is cost, study after study have shown it will take just a few percent of global GDP to virtually eradicate our emissions. This is mostly due to the fact that renewables are not only abundant, they just keep getting cheaper. In the UK, wind is now four times less than gas, and once deployed it is incredibly cheap to run. Decarbonising will also yield significant cost savings through, the improvements to global health. This is simply the benefit of not burning fossil fuels in power stations or in boilers and hobs in our houses.  What’s stopping us is mostly politics, failure to understand the gravity of the situation and the influence of vested interests.

There are a few, but here a three important ones.

We have to end fossil fuels more rapidly than we care to admit, or that the owners of those assets would like. This won’t be easy as the industry is unlikely to simply roll over, especially as the banking sector has continued to pour money into this sector (£2.8 trillion in total) since the Paris Agreement. The same applies to insurance as major insurance companies are still investing in and underwriting new oil and gas reserves.

We have to end fossil fuels more rapidly than we care to admit, or that the owners of those assets would like. This won’t be easy as the industry is unlikely to simply roll over, especially as the banking sector has continued to pour money into this sector (£2.8 trillion in total) since the Paris Agreement. The same applies to insurance as major insurance companies are still investing in and underwriting new oil and gas reserves.

Finally, we don’t yet have clean solutions for energy intensive industries such as cement, neither do we for aviation – which is expanding rapidly.

Will lifestyle changes be required?

For the first time the IPCC have made reference to changes to behaviour and lifestyle. According to the IPCC, there is potentially a rapid 5% cut in carbon if we do the right thing.  Making changes to diet, travelling by public transport, and turning the heating down are certainly worth doing, but there is a danger here. Focusing on these changes takes attention away from what matters, cutting fossil fuel consumption. The IPCC may have inadvertently unleashed a new type of greenwash.

What role can insurance play?

The insurance industry now needs to step up and use its unparalleled level of influence over fossil fuels. Not only is the industry one of the worlds biggest investors in fossil fuels, it also provides underwriting services, without which, no gas field or oil well could operate. The IPCC report made clear, unequivocal statements on the use of fossil fuels, the key and most immediate being that there should be no new fossil fuel projects. This should now be a red line to all insurance companies. It’s time to stop investing in and insuring new production in coal oil and gas. In the words of UN Secretary-General Antonio Guterres, “Investing in new fossil fuels infrastructure is moral and economic madness.”

After halting expansion, there is the uncomfortably reality of fossil fuel phaseout. From an insurance perspective this requires an industry wide effort to ensure insurers are only working with fossil fuel companies that accept that they will have to leave substantial fossil fuel resources in the ground, unburned.

Whilst there are insurance companies such as Swiss Re and Axa leading the way, most simply not gone far enough and collectively the industry is still failing. Naturesave will shorty be launching an Insurance Manifesto in an effort to encourage more rapid change.

How has the IPCC report been received?

– ‘Key quotes from people in the know‘

The report is over 3,000 pages long, even the summary for policy makers is not a quick or easy read.  So to conclude, we have picked out key quotes from notable contributors and commentators;

Once the report was published Christiana tweeted on the lack of action to date;

“I’m lacking words for this. It’s beyond immoral. It’s suicidal,”

“Today’s IPCC report is clear: we have a window of opportunity to keep 1.5 degrees in reach – but it is closing fast. It is vital we act now in this decisive decade”.

“The IPCC report shows we already have climate solutions we need & action now is cheaper than delay Time to pick a side – big polluters & those who bankroll them, or the future of humanity. As COP President, UK must lead by leaving fossil fuels in the ground.”

“This report shows that while some sectors are heading in the right direction, climate change is moving faster than we are. We cannot hold on any longer to the polluting fossil fuels that are wrecking our climate and destroying the natural world on which we all depend.

“We will miss the crucial goal of limiting global warming to 1.5°C unless we dramatically scale up climate solutions to rapidly cut greenhouse gas emissions. This means investing at scale in powering our societies more efficiently, using clean renewable energy, conserving and restoring nature, moving away from unsustainable business practices and leaving no one behind in this transition. Every moment, every policy, every investment, every decision matters to avoid further climate chaos“

“There is no silver bullet for solving the climate emergency, but there is a smoking gun: fossil fuels”.

She went on to say “The Working Group III report on mitigation affirms that we cannot keep warming below catastrophic levels without first and foremost accelerating the shift away from all fossil fuels, beginning immediately. States may water down the text but they cannot mask this clear scientific reality: Only a rapid and equitable phaseout of fossil fuels, and the transformation of our energy system, can avoid overshooting 1.5°C and the irreparable damage that would follow. Relying on speculative technologies that prolong the use of fossil fuels and purport to deliver emissions reductions or removals in the future, after temperature rise surpasses 1.5°C, will cost lives and inflict further irreversible harm. Carbon capture and storage, for instance, cannot make coal clean, turn gas green, or render oil carbon-free“.

“Any option will have negative impacts on some consumer groups or stakeholders… to manage these, the best option is to involve these stakeholders from the beginning of planning these actions”

Here, it seemed appropriate to include three quotes, as each of them are quite profound;

1. The latest IPCC report is a litany of broken climate promises. Some government & business leaders are saying one thing, but doing another. They are lying. It is time to stop burning our planet.

3. We are on a fast track to climate disaster… this is not fiction or exaggeration

Finally, if you want to know in detail what this final IPCC report means and learn how we can tackle climate change then we advise reading this in-depth Q&A by Carbon Brief;

In-depth Q&A: The IPCC’s sixth assessment on how to tackle climate change