Global Warming Science – Time to go back to school? 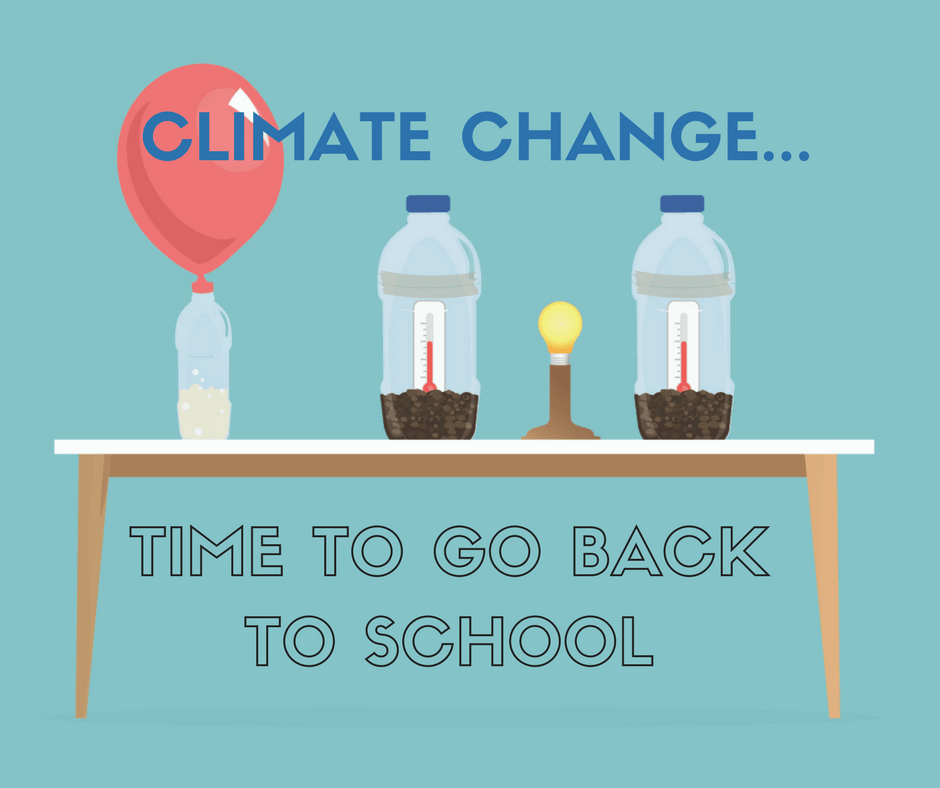 Here at Naturesave, we thought we would offer you a simple climate change experiment, one that you can perform at home, and one that will clearly demonstrate what happens when the levels of greenhouse gasses in the atmosphere increase. Why do we feel the need to do this?

Well, the fundamentals of climate change have been understood for decades. Yet an active climate denial movement has created the idea there is still a debate, with two ‘sides’ to report on. From Donald Trump pulling the US out of the Paris Agreement, to recent polls that show one in eight (13%) of Brits admit they don’t think global warming is real, its time to put the argument to bed.

The greenhouse gasses, CO2 and methane, are naturally occurring in limited amounts and help keep our atmosphere at just the right temperature to sustain life as we know it. Unfortunately, if we produce an excess of these gasses, the global average temperature will rise, leading to a catalogue of potentially serious problems.

The science is quite simple. Before human economic activity began to increase, the earth was able to maintain a relatively stable temperature by reflecting back much of the suns solar energy. About one-third of this solar radiation is immediately reflected straight back into space. The rest is absorbed by into the oceans and the land before being released into the atmosphere as thermal radiation, which then passes out into space

The problem with gasses like CO2 and methane is their ability to trap solar radiation within our atmosphere, preventing it from being reflected back into space. Increasing the presence of these gasses holds more heat in the atmosphere, causing it to heat up, just like a greenhouse.

Follow the steps below, to perform the experiment to demonstrate the impact of a build-up of greenhouse gasses. 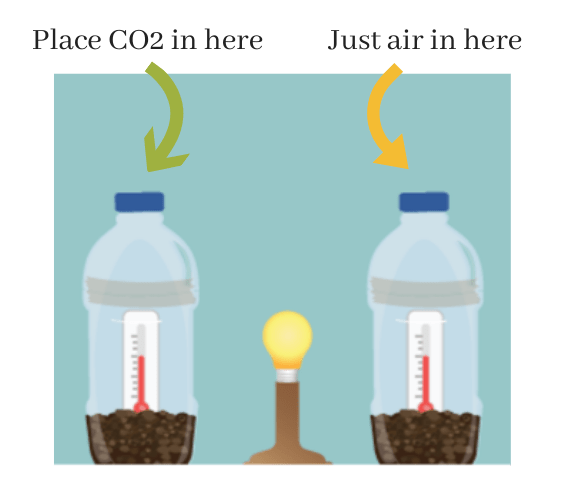 What you will need: –

How long will it take – Less than an hour

When and where to carry it out – At home, at school, at dinner parties, just about anywhere really.

Cut the top of each plastic bottle, place a thermometer into each and seal with sticky tape. Ensure the thermometers are positioned in the same manner in each bottle. (As an option you can add a similar amount of water in each bottle. This improves stability and acts to simulate the water on our planet). Seal both bottles with the blue tac.

Place the light source at an equal distance in front of each plastic bottle. You have now created two simulated atmospheres that represent the earth. One bottle will be left to contain regular air. In the second you need to add a source of CO2.

Record the temperature in both test bottles before commencing the experiment.

Preparing the CO2 source. Pour the vinegar into the small plastic bottle. (Fill it by approximately one fifth). Then, take the balloon and add two heaped teaspoons of baking soda into the balloon. Carefully place the balloon over the neck of the bottle, ensuring it is sealed. When ready, lift up the balloon so the baking soda contents falls into the bottle. The reaction will then produce CO2, which will fill the balloon.

Adding the greenhouse gas (the CO2). Remove the balloon from the source bottle, being careful not to let the gas escape. Now attach the balloon over the neck of one of the test bottles. Note, it can help to squeeze in the sides of the bottle a little beforehand, this helps when adding add the CO2. Remove the balloon and replace the seal immediately.

Your global warming simulation has now begun. Record the temperature in both bottles every minute for 10 minutes. In this experiment, the test bottles represent our atmosphere. The different levels of CO2 between the bottles should demonstrate what happens when greenhouse gas levels increase. As you will observe the bottle with the added CO2 will experience a greater temperature increase, as the CO2 acts to traps the energy supplied by the lamp.

We think this experiment clearly proves the impact of an increase in greenhouse gasses. If you want further evidence, that explores the impact of human activity on causing climate change, we recommend using this tool created at NASA’s Goddard Institute for Space Studies – NASA Interactive Visualisation.

If you would like to take action to combat climate change, we recommend going for a plant-based diet, flying less and switching to 100% green electricity. Oh, and you could always change your insurance provider. Take out Home Insurance with us and we will give 10% of the annual premium to our environmental charity The Naturesave Trust. We will also plant a tree, which we do for every new policy issued.