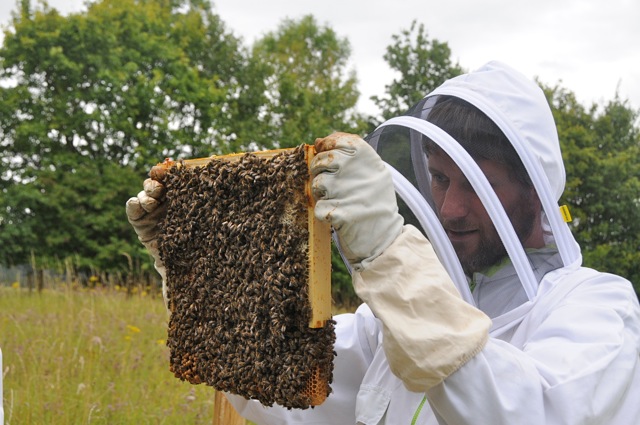 Right from the start, it was recognised that having a resident population of pollinators would be key to the success of the rewilding of the wildflower grassland, as well as benefiting the orchard planting.  Their first hive installed at Southill in 2017, was an experimental design originating from the Czech Republic. The unique Thermosolar hive design uses passive solar gain to elevate the internal hive temperatures, as a means of killing off the endemic varroa mite that currently plagues all bee populations.

Beekeepers conventionally need to treat their bee colonies with a variety of chemicals to control the varroa mites, none of these chemical treatments provides 100% efficacy, and all of which have detrimental side effects, ranging from reduced fertility in the bee populations, aborted brood, and tainted honey.

For this project, the Naturesave Trust funded an additional two Thermosolar hives which Southill intend to use to demonstrate that this new type of beehive can benefit honeybee populations by providing a means to control the spread of varroa mites without resorting to chemical means and to encourage more beekeepers to adopt thermosolar beekeeping.

In addition to bee conservation, the new honeybee colonies act as excellent ambassadors for Southhill Community Energy, as well as solar farm development in general. By demonstrating the natural synergy between solar farms, wildflower meadows, and beekeeping – Southill can show local communities that the solar rewilding project can still yield a valuable agricultural crop of honey, and the final product will find itself on the shelves of local shops, and eventually into the diets of local communities.